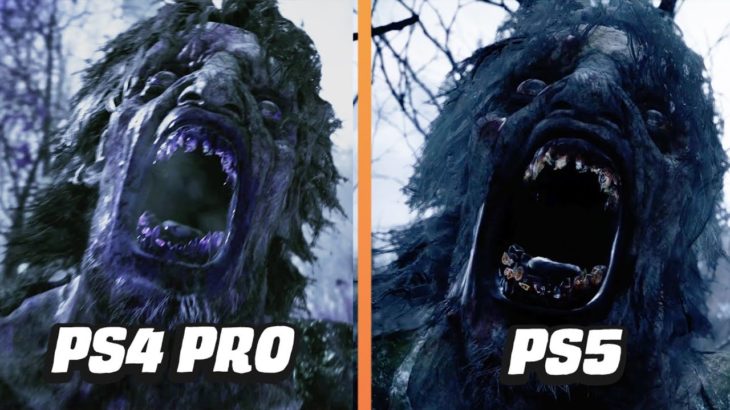 Resident Evil Village is the first in the series to be fully cross-gen, so let’s compare load times and gameplay between a PS4 Pro and PS5 to see how each holds up.

In the above video, we take a look at how the PS4 Pro and PS5 versions look in this back-to-back comparison, with the most notable difference being its load times, which is leaps-and-bounds faster on the PS5 thanks to the consoles SSD. Another advantage of the PS5 version is ray tracing, which is absent from the PS4 version.

Despite ray tracing and load times, however, Resident Evil Village is an impressive visual feat that manages to look and run very well on previous gen hardware. So fear not, PS4 owners, Lady Dimitrescu will still stalk and prey on you in all of her tall and menacing glory all the same from the looks of this comparison.

It won’t be long until we step into the shoes of Resident Evil 7’s protagonist, Ethan Winters, once again in the search for his daughter Rose. The demo, which featured a segment of the village and Lady Dimitrescu’s castle, still leaves many questions to be answered, like Chris Redfield’s involvement and why he murdered Ethan’s wife Mia. It also remains unclear whether or not Lady Dimitrescu is the main villain, and who exactly Mother Miranda is.

Resident Evil Village is taking clear inspiration from one of the franchises most beloved installments Resident Evil 4, which also prominently featured a village and gothic-like horror. There are several other notable similarities like the return of a tetris-like inventory system, a merchant, and weapon upgrade systems.

Resident Evil Village is a direct sequel to Resident Evil 7. If you need to be caught up on the events that happened at the Baker house in the previous game, you can watch our story recap here: https://youtu.be/c_M_KFIzqa0

Resident Evil Village comes out on May 7 for the PS5, PS4, Xbox Series X|S, Xbox One, and PC.